The project consists of the renovation of approximately 9,280 square feet. Presently the unit consists of 30 skilled nursing beds in combination of wards, double and single rooms. The new concept will consist of 20 beds.

The goal of the Batavia VA Ward B renovation project is to have as an end product an environment that has a homelike atmosphere and that creates as many private rooms as possible.
It was determined after numerous work sessions with VA staff that the renovation should reflect a state of the art skilled nursing unit on the second. Based on Batavia VA’s desired care direction the unit will be treated as a “household”.

The household by its nature and if required by program can be a self-contained and or secure unit or be open based on specific program needs and requirements.

The household is to have its own support space including a “Country Kitchen” and dining/activity space.

The bedrooms will meet ADA and VA Standards and include the required net usable space including an adjoining bathroom including vanity and water closet. Other bedrooms as shown on the floor plan will include handicapped showers primarily designed for female veterans and bariatric resident use.

Finishes and lighting will be calming and warm. Dark spots will be avoided based on the lighting plans. Finishes will be such as to provide a safe and warm “Homelike” atmosphere. 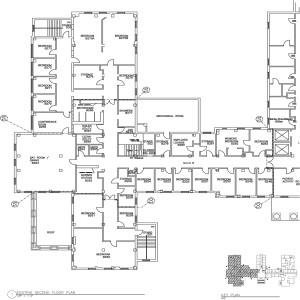